Note to Reader: The following is a story from about a month ago.

A few days ago Sharon and Rona (my two new Israeli friends) and I were at a cafe when we were joined by a fellow hippie from Hariharalaya, the yoga and meditation retreat we were staying at. Our hippie friend had brought along his 4 Cambodian friends, and we learned that one of them taught at a free English school in the evenings. We asked if we could come volunteer just for the day, and of course he said yes!

So today we rode our bikes 10 minutes down the red dirt road to the school, a small outdoor room with wooden desks, a dirt floor, and a whiteboard. All the kids were at different levels, so I suggested that the teacher split them into groups. I had the group of 'best' speakers, six girls and boys ages 10-15, each armed witha notebook and pencil. Even though I didn't have anything planned it went very well - it was fun to make it up on the spot!

First I had them introduce themselves and I asked them questions about their daily routine to gauge their levels. (All of them ate rice soup with dried fish for breakfast.) Next I had them choose an animal they like - tiger, monkey, ant, etcetera. They wrote it in their notebook (I helped with spelling) and then they stood up and taught the rest of the group how to spell the name of their animal. I didn't even ask them to stand up when they were 'teaching' - they just did! I used that as a jumping off point for the rest of the lesson - each student thought of three adjectives to describe their animal and then taught those words to the rest of the group.

These kids are so enthusiastic about learning english. They are all very well behaved and had great manners; in fact I think they are the most polite kids I've ever worked with. They are all extremely poor and run around barefoot selling postcards to tourists all day before and after school.

Their teacher works as a temple tourguide, making about $20 per day leading tourists around the temples. Many of the Cambodian people I met seem to be studying a foreign language so they can become a tourguide. When I was exploring the temples I overheard Cambodian guides speaking Korean, Chinese, Japanese, Vietnamese, Thai, Italian, French, and Spanish. I also talked to a construction worker whose english is pretty good but not quite good enough to be a tourguide; he makes about $40 PER MONTH working full time.

Just 40 years ago, before the horrific violence of the Khmer Rouge and Pol Pot (I just read "First They Killed My Father," an autobiogrpahy about a girl who survived the genocide) these peoples lives had very little to do with money. They mostly grew their own food and traded with their neighbors for everything they needed. Now their lives are much more centered around making money, buying food for their family, an upgrade for their motorbike, or a new cell phone - almost everyone has a  cell phone, even if they live in a dirt shack with no toilet.

I learned so much in my three weeks in Cambodia, and sincerely hope to return again someday to stay for a longer time to see the rest of the country. The people are so warm and friendly, and there is so much fascinating history. It's a great place to visit to volunteer for an NGO, and there is a large community of expatriots who are usually happy to chat about the projects they're working on. I'd reccommend Siem Reap, Cambodia to anyone planning to travel in South East Asia. It's definitly been a highlight of my trip so far! 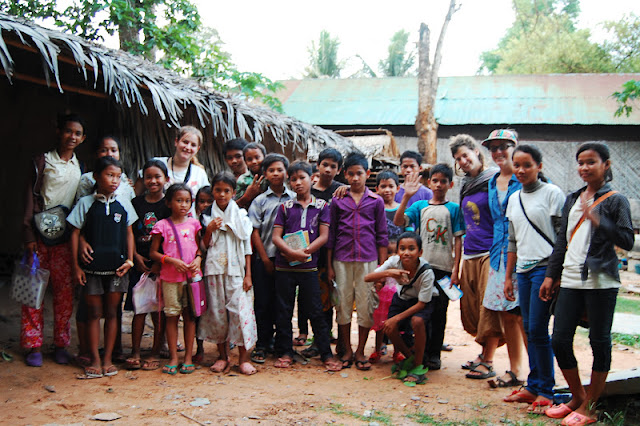 All of the kids from our class. Sharon is on the left, then Rona, and there's me in the silly hat. 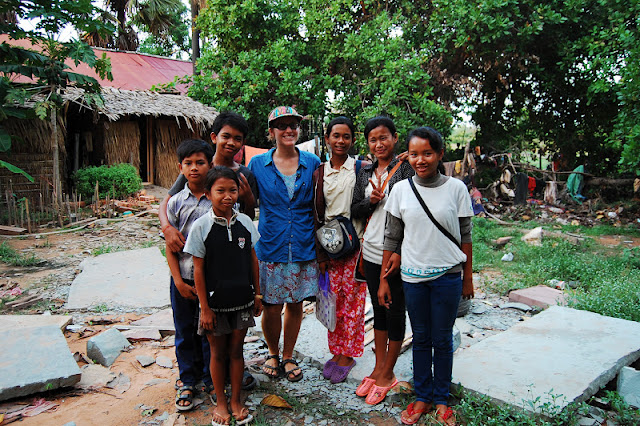 Here's the group I was teaching 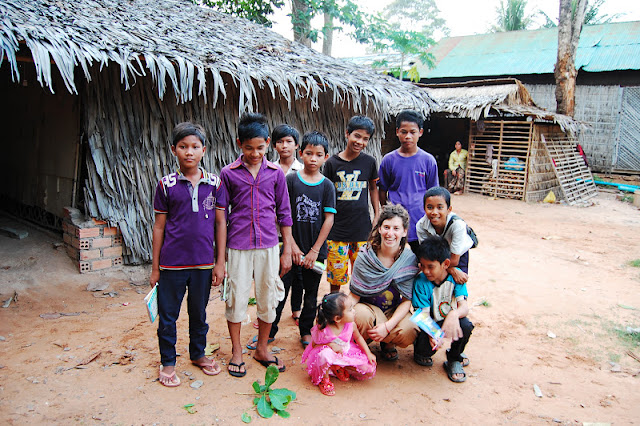 Rona's group. I love how the little girl in pink came over to be in the picture.
Posted by Amber at 1:39 AM