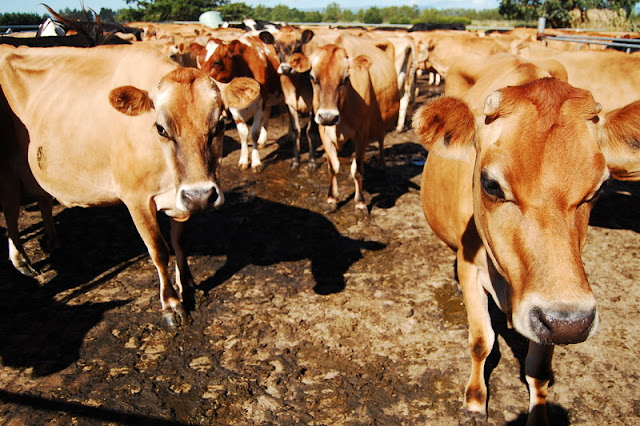 Cows, cows, cows!!! They're so cute and silly! But also very stinky.

I am writing from a dairy farm in Edendale, where James and I have been milking cows for the past two weeks. There are only 150 cows on this farm, which is very small for New Zealand standards. Most farms in this region have 500 to 1000 cows. Because our farm is so small the owner Graham knows all of his cows by name.

They are milked on a carousel-type machine which we have learned operate. A cow climbs up a concrete ramp onto one of the 22 available spots, and  is rewarded with a bucket of treats, sticky oats and grains sweetened with molasses. Then Graham rotates the carousel so there is room for the next cow to climb into the next section. Then he attaches teat cups to the udders of the cow in front of him, turns the carousel a bit more, and does the same with the next cow. The teat cups suck milk from the cow rhythmically, like a calf would do naturally, and transfers it by pipe through several filters and into a large metal vat.

﻿ ﻿
﻿﻿
It sounds simple enough but there is a lot that can go wrong. Just by looking at their rear ends Graham can recognize which cows have unsatisfactory milk, so he puts their milk into a seperate container and uses it to feed the calves. Sometimes a cow can kick the tubes off its udders, which causes the whole system to start malfunctioning - the tubes can start sucking the dirty, poopy water into the vat. During the milking, cows are constantly shitting and peeing, and there is no way to avoid getting poop on your hands and clothes.( I wore gloves for the first few days but realized that they are too annoying and get in the way.)

There are three jobs - putting the teat cups on, taking them off, and standing on the carousel with the cows refilling their containers of food.  James and I usually take turns taking the cups off and feeding them. Being with them on the carousel is nice because you get to look at their silly faces instead of their pooping butts.  One particular golden cow always tries to stay on the carosel to trick you into giving her more treats, I usually have to push her off!

﻿
﻿
﻿
﻿
Despite the not-so-pleasant smells - even while feeding them you have to put up with their stinky breath -  the milk turns out great.  James and I sometimes take some home in a pitcher. It's so rich, we eat it with Wheet-Bix (the most popular cereal in New Zealand) and we've used it to make pancakes and a quiche.

The cows are milked twice daily, once at 5AM and once at 5PM. Each milking takes about three hours.  Their daily milk production is picked up by a truck and delivered to the nearby Fonterra Milk Factory. Each day the cows produce about $1200 worth of milk, but Graham says there are from $35,000 to $40,000 worth of monthly expenses. Grahm's parter Debbie works at another local dairy farm. They also sell meat locally, adult bulls and calves for veil. Once a year they kill one of their bulls and then have meat to last them the whole year.

After milking, I get to feed the calves, which is my favorite farm activity! Jack (also known as James the Second) is a 1-week old calf with a big personality. His mother died when he was born, and they took her away in a truck. Jack, only a few hours old, chased the truck down the road! Luckily Graham had some cholostorum in his freezer, which is special nutrient-infused milk cows produce right after they give birth. Jack has been doing fine, I love spending time with him!

I got to feed the 24 calves milk twice a day, and gave them hay in the morning.


﻿
﻿
Grahm and Debbie left for four days, leaving James and I to help run the farm while they were gone. We had help milking the cows from Grahm's brother. We had a great time and felt like real farmers for a few days!