A few weeks ago we were hitchhiking out of Dunedin, headed north, when we met a friendly local who showed us a campsite next to an estuary near his house where we could pitch our tent for free. He recommended where to collect shellfish along the beach, which we cooked up for lunch the next day, and even encouraged us to stop by his place 'for a cuppa' or to borrow one of his canoes.

So the next evening, we walked over to his house, but he wasn't home. His neighbors told us he was out in his canoe and suggested that we take out his other canoe to meet him in the water. Why not?

Ten minutes later, just before dusk, we cross paths with his boat, in the middle of the estuary. He passes us a cold beer and we have a chat. His buddy, a dreadlocked motercyclist, starts telling me about his amazing trek around Stewart Island. He was raving about how epic and surreal it was, to be out in nature, no sign of civilization around; just you and the forest and the ocean.

I started to feel like we had seriously missed something. Stewart Island was 5 hours south of us; we had skipped it because it cost $70 to take the ferry there, each way!  But the dude assured me it was worth the money, especially if you are there for ten days. In the canoe in the water, it seemed as if fate was speaking to me in the form of a smelly local; I knew I wanted to go back down to Stewart Island.

Luckily my travel buddy and boyfriend James is spontaneous and loves the outdoors, like me, so we turned around and headed back south. We stopped for one week to WOOF on an organic farm in Clinton (where, besides weeding, there is absolutely NOTHING to do) and before I died of boredom we left, hitching a ride through the Catlins with an English couple who had bought a car. They dropped us off at a backpackers and took showers before heading to some inconspicuous side street to sleep in their car.

The next day we hitchhiked to Bluff, the small town at the end of the south island, with a very sweet Maori lady who worked at the hospital and gave us a tour of the town before dropping us off. She took this picture of us with her phone and emailed it to me (I didn't bring my big SLR camera on the trek, too heavy and precious!): 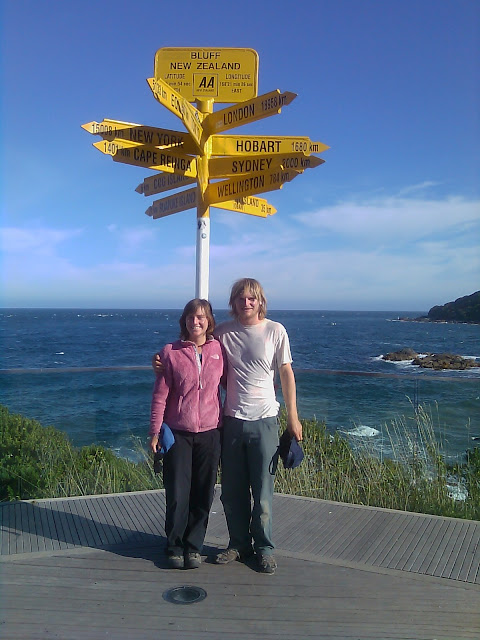 Here we are, pre-trek, looking kind of scraggly.

With my flute, camera, and extra clothes stored in a locker in Invercargill and our backpacks stocked with food for the next 10 days, we took the 9:30 ferry to Stewart Island and were met at the dock by our Swiss friend Matt, who is going to stay at my house in California with my parents when he travels the USA in a few months.  Matt showed us where the DOC (Department of Conservation) office was where we purchased our hut tickets, $5 per night. At about noon we were on our way to the first hut, a 6-8 hour walk from town. Luckily we were able to hitch a ride with a local on the back of his pick-up truck which saved us an hour walk on the road.

By sunset we were at the Bungaree Hut with 7 other enthusiastic trampers: 2 Israeli boys, an outspoken Australian (although have you ever met an Australian who is NOT outspoken?), an American, and one German. All guys. I was afraid we'd be stuck with these snorers for the rest of the trek, but lucky for us after the second night some of them turned around (knee problems)  and a few stayed for a day trip. After that night we had the trail to ourselves and didn't see another person for FOUR DAYS.

The trail was the most difficult hike I've ever done. Often we were climbing up steep muddy faces, pulling ourselves up with tree roots. (It reminded me of this trail in Argentina with my dad:)

By day three my shoes were soaking wet, which was almost a relief because it meant I could walk right through mud puddles and streams without wasting time trying to side-step around them. On the trail, my thoughts alternate from : "This is so great! I'm so glad we're here!" to "This is horrible. Why am I doing this."

The trail would undulate through the forest, up over hills, down to a stream, and up to the next hill. Then you would reach a beach, where (naievely) we had planned to have a snack. However, on a sunny day, the sandflies (the viscous New Zealand version of mosquitos) won't allow you to stop, let alone and sit down and eat lunch. As long as you keep moving, the hundred of flies follow in your wake, but as soon as you stop, its a bloodbath.

Despite the sandflies, one day James ran ahead to the next beach to try out our new handline, which is like a fishing pole without the pole. Using his fancy pocketknife that I bought him for his birthday he gets an oyster off a rock, sticks it to the end of the hook, and tosses it into the water. And voila, ten minutes later: two fish for dinner!

On the morning of our third day, it started hailing and raining. Despite our rainjackets and packcovers within the hour we were completely soaked. However we had our warm clothes wrapped securely in trashbags inside our packs, so even though everything on the outside got wet, we were able to change into our cozy dry clothes and crawl into our warm sleeping bags after a day of slipping and sliding through the mud.

The rain didn't stop for the next 3 days. On the beaches, waves would crash violently on the shore and sharp raindrops pelleted us sideways. Once I began to accept that I would be wet throughout the day, it became more fun; especially since with the dark skies the probability of seeing kiwis was higher! Kiwis, the flightless brown bird that New Zealand is famous for, are nocturnal on the mainland, but on Stewart Island they sometimes come out during dark rainy days. We were lucky to see  few of them right next to the trail!

We brought the perfect amount of food with us, and even had a little extra in case we needed to spend an extra day on the trail. For breakfast every day we would have a cup of museli (we brought 2.75 kilos of it!) and peppermint tea. A snack on the trail was some trail mix and dried fruit, and we would stop for a lunch of crackers, cheese, and sometimes tuna in the mid-day. A few hours later we'd munch on more trail mix and have a nice dinner at the hut of couscous, rice, or instant noodles with tuna, fish, and dehydrated peas. We also brought two freeze-dried backpacker meals which were great for the last two nights.

After 3 days of not seeing anyone else, we were happy to find the wood stove burning at East Ruggedy Hut with a party of 4 hunters who had been dropped off in a helicopter a week ago.

On East Ruggedy Beach James found a message in a bottle that was released in 2005! I sent an email to the address left in the bottle, and she's already gotten back to me! She released the bottle on Aurora Australis, an iceberg in Tasmania, in Februrary of 2005.

On day 8, my knee was starting to hurt a little and the next day was supposed to be the hardest, 11 hours or so. Some people at the hut had already booked a water taxi from there back to the start of the track, so I decided to go with them. So I took everything left that was heavy - fuel canisters, extra clothes - so James could jog the rest of the way with a light backpack. The water taxi can only come at high tide, so around 7pm a little boat came up the river and took us back to Oban. On the way there we saw dolphins!

I booked the last room at a backpackers, which was lucky because the whole town was flooded with kids on a camping trip! James met me there the next day; he had done the supposed 11-hour trip in about 7.

Its been a few days since we've finished, and the soreness is starting to wear off, and I'm already thinking about our next trek! I can't believe I didn't do more backpacking in the USA. Someday I want to do the Appalachian Trail and the Pacific Crest Trail.

Thanks for reading
Posted by Amber at 8:00 PM