As dawn breaks on a frosty morning on New Zealand's west coast, I find myself walking along the creek, watching a miner pan for gold  in the river flowing through our campsite. All around me, the bush is coming to life. Birds are chirping, their melodies winding around the trees, greeting the rising sun. Unfortunatly, this tranquil moment is soon shattered by the cries of another creature stirring from her slumber, my 1-year-old travel companion, Willow. "MUUUUM! MUUUUM! MUUUUUUUUM!"

Day three on the hippiebus, and it's chaos as usual: pre-breakfast screaming and coddling by mom Kristy, frantic searching for adequate clothes for the day, and preparation of our breakfast crumble.  To spare the rest of the campers the screaming baby, I offer to take the kids on a bike ride.

She is not having it.

"Come on Willow, lets go! Be quiet! You'll have fun once you forget about your mom!"
Sure enough, the screaming only lasts for about 2 minutes. Her brother Sage is behind me on his bike, his uneven training wheels clanking on the gravel road. At every tiny hint of uphill we both push our bikes. We stop to investigate a child-sized cave.

"We better not go in there!" Sage says, wide-eyed, just as I was thinking we should. I'll never understand the mind of our four-year-old.
We continue around the winding road, Willow looking surly but at least not screaming and Sage pushes his bike,  pretending he's about to die of exhaustion. Finally we turn around, and its an easy coast downhill. No one drives down this gravel road in the middle of New Zealand nowhere.

When I turn the corner to the campground, Willow spots the moon. It's full tonight.  "MOOOOOON!" Willow says excitedly, pointing at the huge yellow orb rising though the beech trees and ferns. It's her favorite word.

Back at the caravan, after an ecstatic reunion between mother and daughter, Kristy asks her baby: "Did you have a good time?"

And, with an indifferent glance in my direction, she nods! That tiny nod from Willow made my whole trip worthwhile.

Even though I'm thousands of miles away from everything familiar, there are moment when I realize that I am in the right place. Last week I got to go on the road trip of a lifetime, just because fate had decided so. Here's how it all fell into place:

A few months ago, James and I were hitchhiking to Riverton near the bottom of New Zealand when we got picked up from a raggedy-looking Canadian named Jesse. On the way to the campsite we asked him to drop us off he missed the turn off so he invited us back to his farm. We met his partner Kristy and their two beautiful kids Sage and Willow along with Jesse's parents who were visiting from Canada. We were soon chowing down on tasty organic quiche and salad. We ended up staying there the whole weekend, playing music and babysitting. Jessie is an accomplished guitarist and writes his own songs. Kristy has a beautiful voice and now has a few original songs too!

A month later, we stayed with them for another week, which was one of the major highlights of my trip: I learned how to chop firewood and milk a goat, exciting new skills for a city slicker like me.

While dropping us off in town Kristy mentioned that she and her friend Tamsin were going on a road trip up the west coast and that we were invited to come along. Unfortunately James had to go work up north but I knew I had to go with them. When else would I have a chance for an adventure like this?

Fast forward to Wanaka 2 weeks later, the site of our rendezvous for the journey. When I first see them from a distance, a spattering of vibrant color by the edge of the lake, I notice that Sage and Willow arenaked and playing in the lake. An assortment of Asian tourists with huge cameras snapping pictures of them!  Wow, blonde naked local kids, great photo subjects! Haha. One Chinese lady (she said ni-hao) walks right up to Willow and tries to pick her up - but no way, she is not having it!

I soon find myself in the moving hippiehouse that will be my home no the road for the next week. It is owned and expertly operated by Kristy and Jesse's best friend, Tamsin. She immigrated here from England seven years ago. Back when she was my age she had serious health problems, which she thinks were from all the processed junk food she ate as a kid. So she embarked on an epic three-year solo trip through Asia to try out lots of different traditional healing methods. (She's writing a book about it!) She was vegetarian for 10 years, and for a few years was on a gluten-free dairy-free yeast-free sugar-free meat-free diet.

Being the reliable hippie health nut, Tamsin had us on an amazing diet with some of the best 'healthy' food I've ever had! It's called the GAPs Diet, the Gut and Psycology Syndrome by Dr. Campbell McBride. In a nutshell we were allowed to eat foods that are easy to digest - organic meat, fish, all fruit, most vegetables, fermented nuts, butter, honey, and coconut - but starch like potatoes and grains like rice or oats were off-limits.

Also on the trip with us was Phil, another hitchhiker who had stayed with Kristy and Jessie. Phil was born in Russia, where he was raised by his grandparents in a tiny village. He moved to England when he was seven to go to private school where he acquired his posh English accent. In high school he had dreadlocks and wore black nail polish, but somehow he transformed to a perfume-wearing metrosexual who took his girlfriend to fancy art galleries and such. Instead of university he studied jewellery making and gemstones. On our trip he was always picking up rocks, and he would go talk to local jewelers who would just give him stuff for free! Phil is also an amazing beatboxer and tried to teach me some of the basics.

Kristy, mom of Sage and Willow, is one of the nicest people I've ever met - she just radiates calm and sweetness. After high school, Kristy trained to be a dental assistant, but like Tamsin found herself with some serious health problems. She tried all kinds of antibiotics and pills but none of them worked - they just seemed to make her sicker. So she decided to try more natural remedies and changed her diet, and travelled by herself in Australia, working on farms (just like me!). That's where she met Jessie, and then they hitchhiked across Canada ... with a cat! Then they moved back to New Zealand together to pursue their dream of living a sustainable life and not having to rely on money - growing their own food, trading with neighbours for what they can't make themselves. I am so inspired by them.

So imagine all of us in one moving room - me, Tamsin, Phil, Kristy, Sage and Willow - for a week! I learned a lot, especially from Tamsin, who does all kinds of hippie healing that I had never even heard of. She has a light machine - like a high-powered flashlight with different colored filters - that she shines on different parts of your body. She gave me a rainbow session and I have to say, despite all my disbelief, I did feel something. Maybe it was psycological, but who knows!

We also cleansed gemstones in the full moon, "om"ed at every meal, and had lots of jam session. We had one great one in front of a grocery store - Tamsin on her violin, Phil on the guitar, and me on the flute!

On Tamsins lists of evils are: cell phones (she never touches hers to her face) sunscreen (she threw mine in the trash) pharmaceutical medicine (she worked for a pharmaceutical company in England for a few years) and processed food - all of the additives, chemical, and preservatives are disgusting. Knowing her has definitely changed my conception of what is healthy. For instance, I grew up thinking butter was bad for you. But the truth is fats are essential. In the American diet we don't eat a lot of animal fats so butter should be used, in moderation as with all food. Margarine and any kind of 'fake butter' is really, really bad.

Both Kristy and Tamsin advocate this amazing book called "Nourishing Traditions" by Sally Fallon that presents old recipes from how people used to cook before supermarkets and fast food, using vegetables from their garden and animals from their farm. It's a really amazing book, I read part of it at Kristys house.

For two nights we stayed at a Tapawera campground owned by Tamsin's friends from England Tim and Coleen. One night Tim gave us a group EFT session. The Emotional Freedom Technique consists of tapping on certain meridian points while focusing on a specific issue that is bothering you. There's a phrase that you repeat to yourself: "I accept every little bit of myself no matter what" in between the tapping and focusing. I'm not sure I completely understand it but the positive thinking part of it appeals to me.

Tim also took us on a hike up to Mount Arthur, where you can see the west and the east coasts of New Zealand! To the west is all native bush, but looking east you see man's impact - deforestation, pine trees farms, pastureland, etc.

As I watch the wandering hippiebus drive off to Golden Bay, I head for Picton to take the ferry back to the North Island. I feel sad to be parting from them but also relieved not have to live in such close quarters with such tiny, loud people.  But I know that I will see them again someday. I can't wait to meet the older versions of Sage and Willow. I have a vision that in 10 years I will come back to New Zealand and visit them on their farm, and see how their dreams have unfolded. 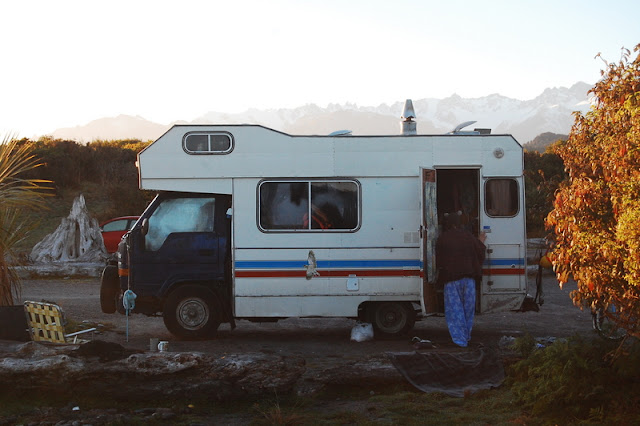 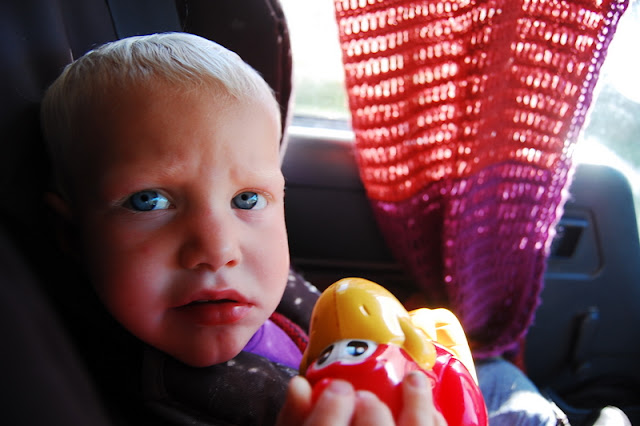 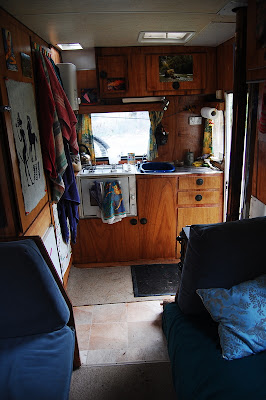 Inside you had a kitchen complete with stovetop, sink, oven, and storage space. 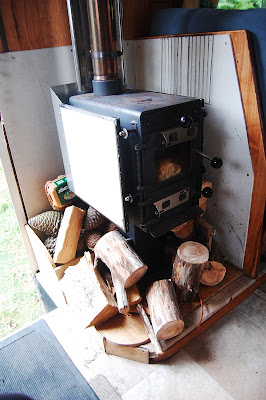 There was even a wood stove to keep us warm at night! 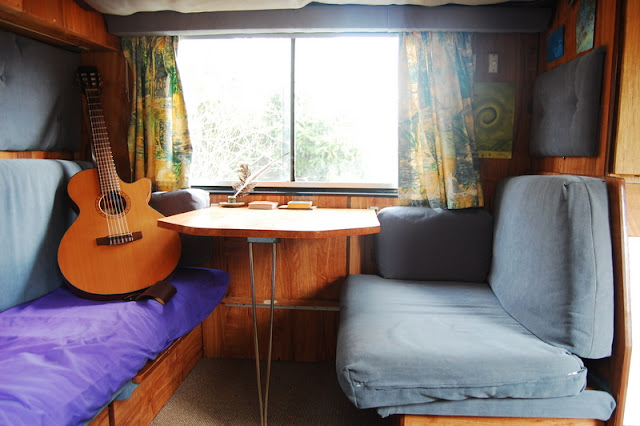 This table slid down to become a bed.
Three people could sleep in this area with three more on top in the loft. 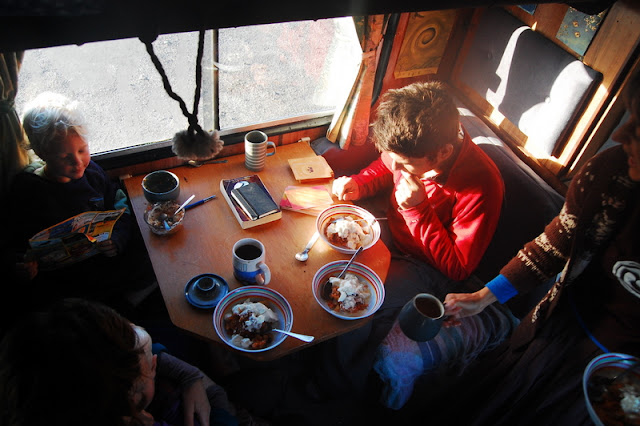 Breakfasttime!  Every day for breakfast we would have an apple crumble - baked apples on the bottom layer, on top grated carrots, 2 eggs, butter, and honey - with organic yogurt. Yum. So good. 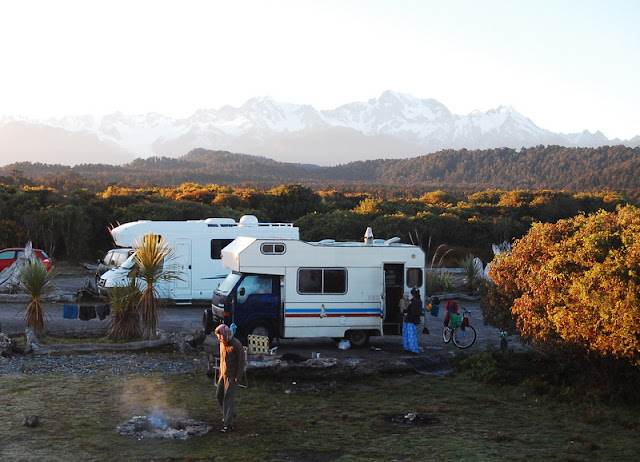 The van at Gillepsies Beach campsite, where you can see Mount Cook FROM THE BEACH. 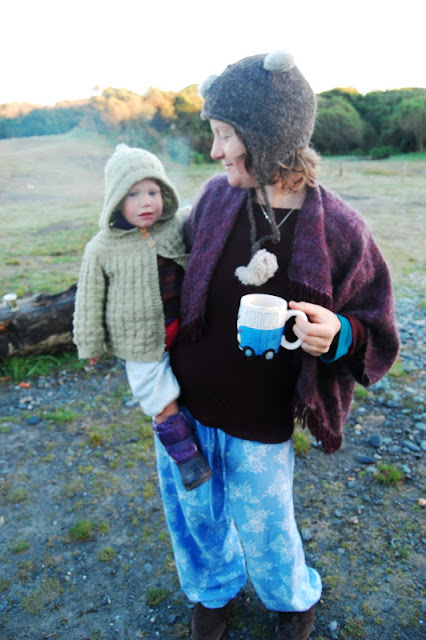 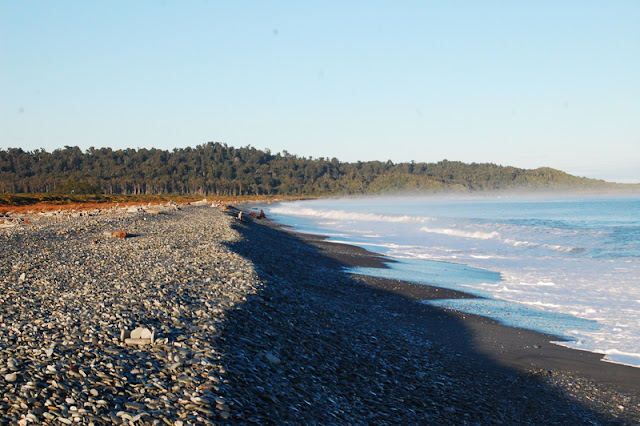 This beach was so cool, we spent two nights here. 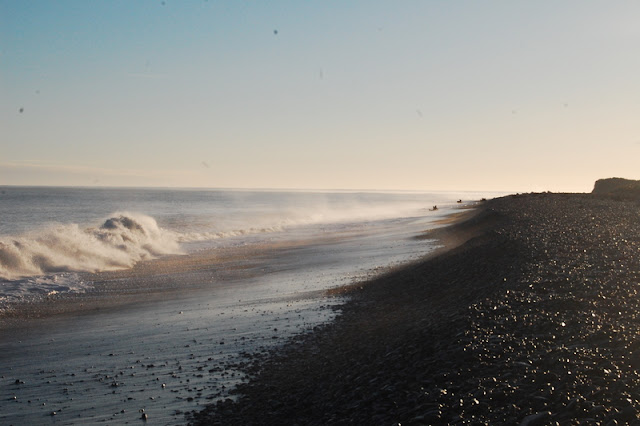 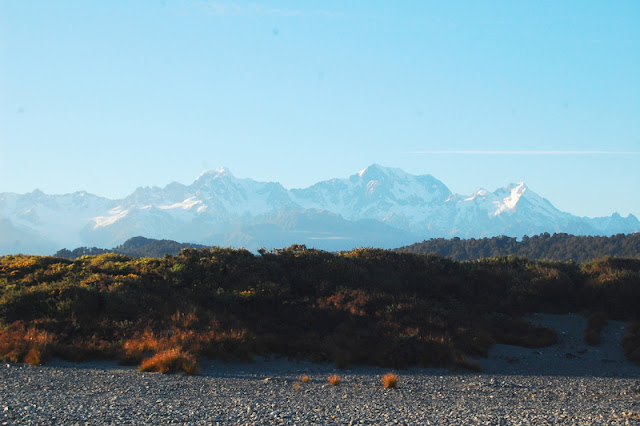 Where else can you see mountains from the beach? Amazing. The pictures don't do it justice. 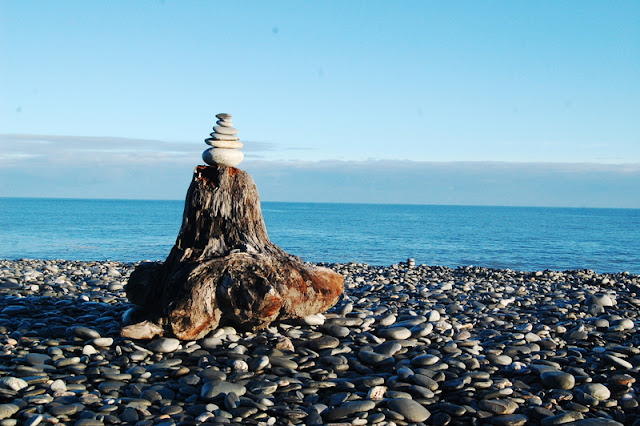 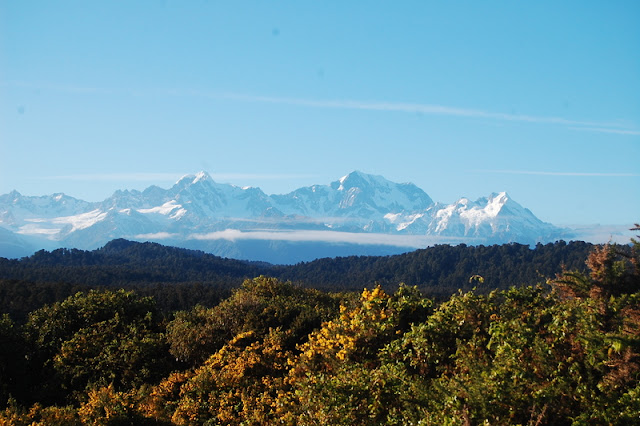 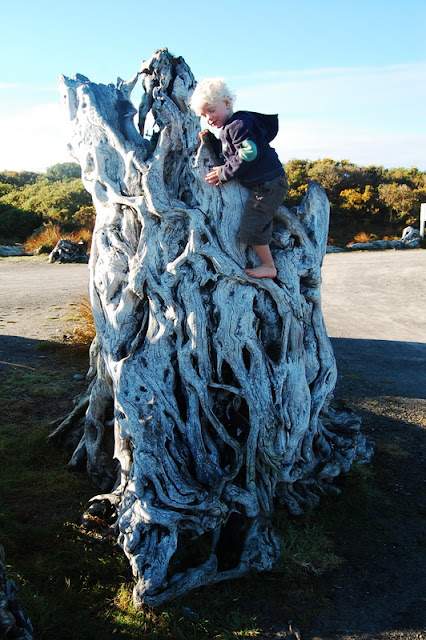 Sage is a good climber! 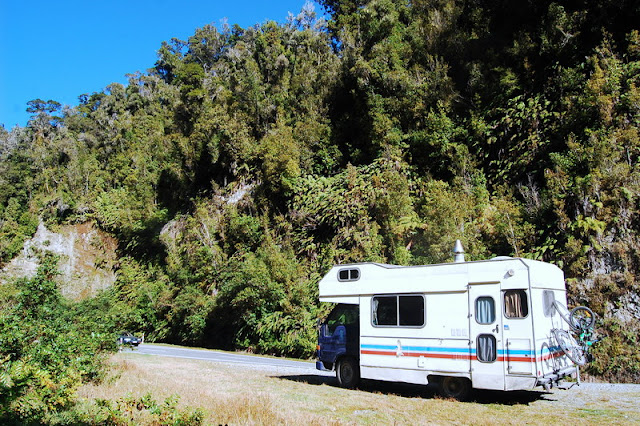 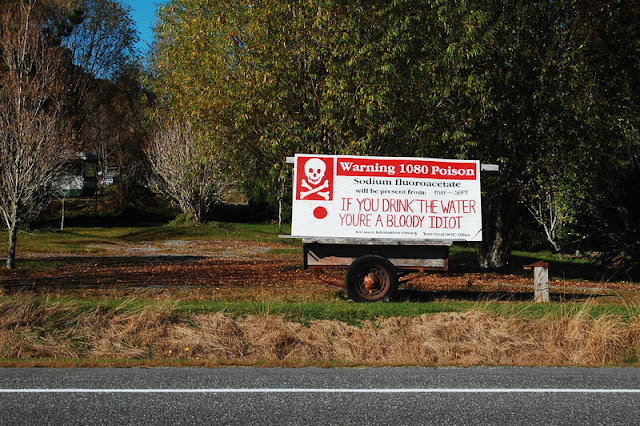 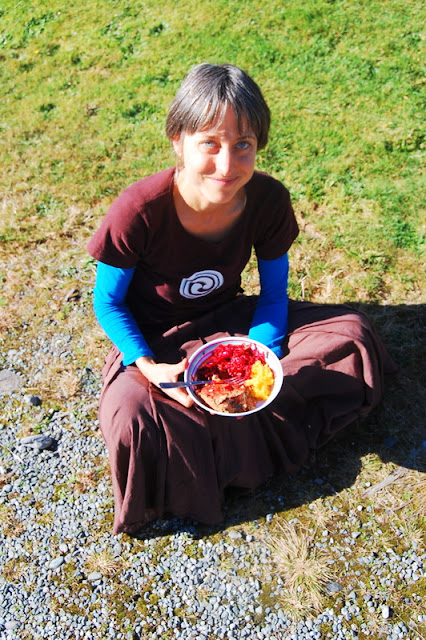 Tamsin, the chef with a delicious lunch: beetroot and carrot salad, mashed pumpkin with butter, and homemade meatloaf. Yum. 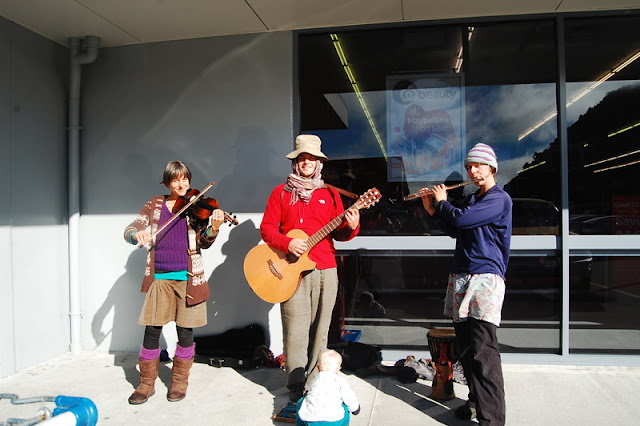 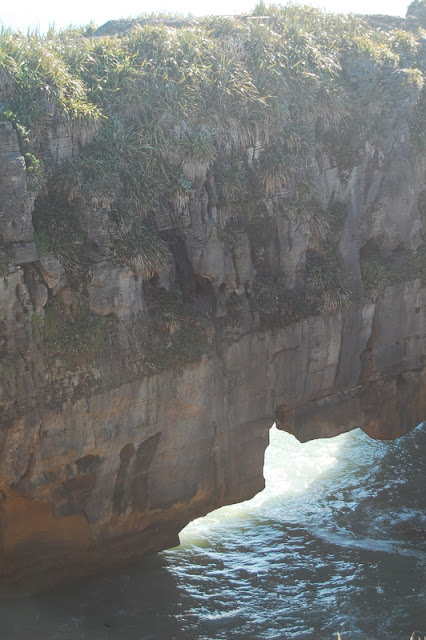 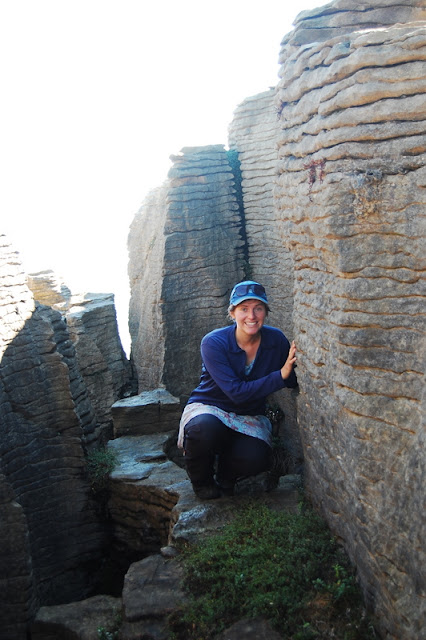 Back at the pancake rocks! 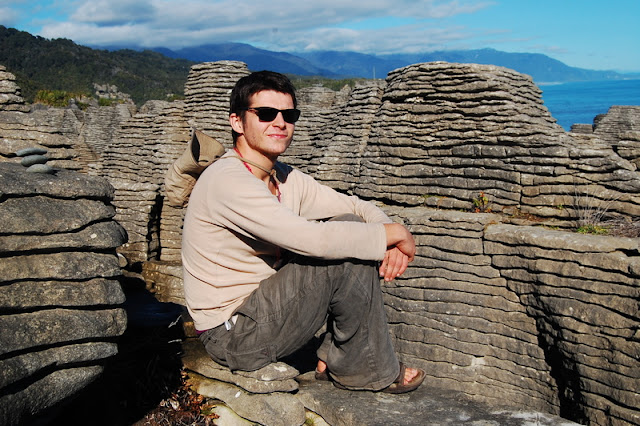 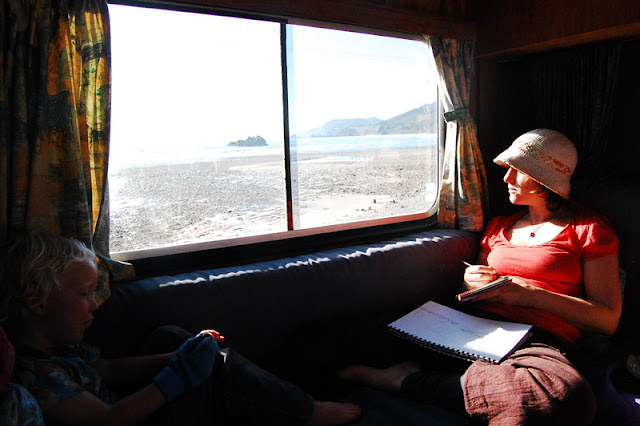 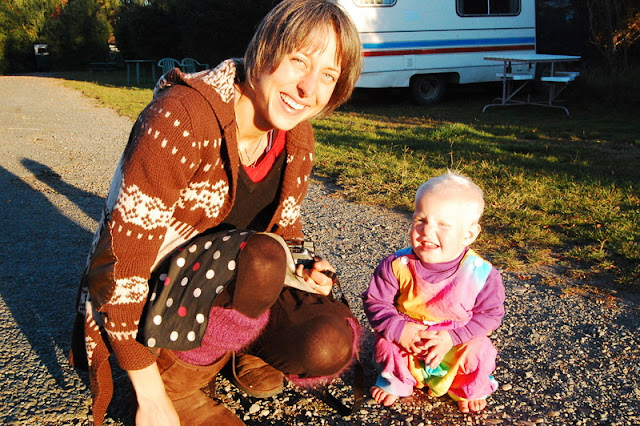 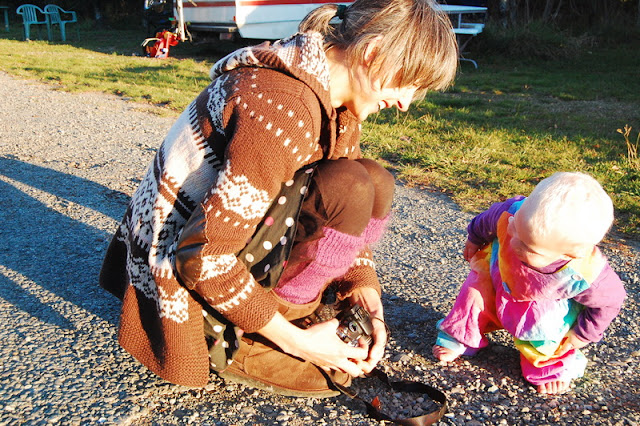 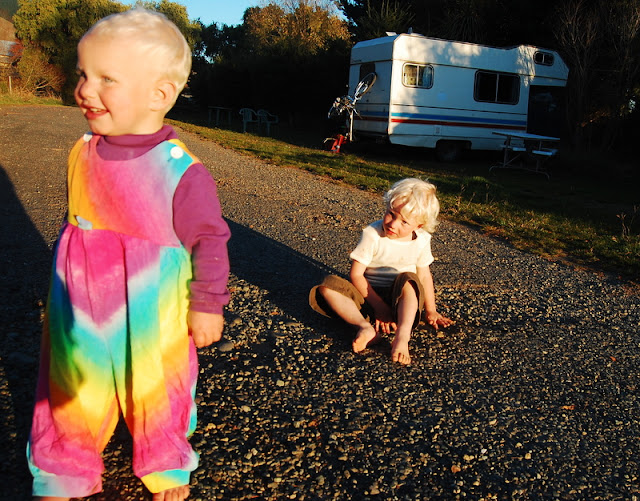